This fonds consists of documents relating to the Business and Professional Women's Club of Ottawa (BPWCO)'s administration, committees, finances, events such as Biennial Conventions, Annual Provincial Conferences, programs and workshops, views on various women's issues such as minimum wage, equality and abortion. It contains mostly textual material such as correspondence, speeches, procedures, publications, reports, budgets, and newspaper clippings, in addition to some photographs and certificates.

The Working Women Community Centre (WWCC) fonds documents the organization's management of everyday activities as well as its programs and services offered to newcomer immigrant women in Canada.

This fonds consists of three t-shirts created for "Take Back the Night" events in Ontario during the 1990s.

This fonds contains mostly clippings and court cases reflecting the Lesbian Mothers’ Defence Fund mandate of providing information and emotional support for lesbian mothers involved in child custody cases. They achieved this by creating a source of literature for lawyers and lesbian mothers to consult, such as court cases, Lesbian Mother Litigation Manual and other articles on the subject. The fonds also includes administrative documents such as meeting minutes and reports, as well as correspondence with affiliated groups and individuals.

White rectangular button with black text and a red skull in a square.

This file contains a green round button with a picture of a computer. On the computer's screen is written "Got the VDTS?". 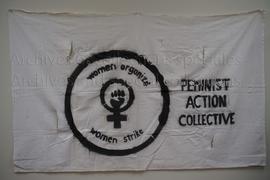 This white button with red text is related to the strike support provided by Feminist Action Collective to unionized women at l'Union du Canada (OPEIU 225).

The Right to Strike is an Essential Service