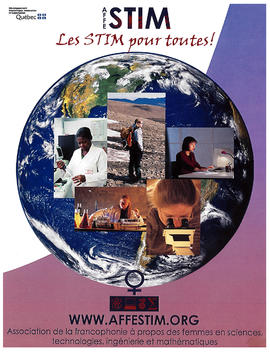 This fonds consists of material related to the Quebec chapter of CCLOW and includes administrative and financial records related to its program activities and conferences. This is comprised of meeting minutes, correspondence, reports, as well as material related to affiliated organizations.

The fonds demonstrate Wall's commitment to fair representation of women in trades, technology, and other non-traditional fields where women comprised an incredibly small percentage of the labour force. For example, this fonds contains records related to Lynn Wall's work as a professor for the Introduction to Non-Traditional Occupations program (I.N.T.O.) at Algonquin College in Ottawa, ON, including resources for adult education, articles, handouts, program evaluations, work placement surveys, and correspondence with stakeholders. The fonds also contain meeting minutes, correspondence, and other records from Wall's participation on various local training boards and advisory groups, and miscellaneous material related to women's success in trades and technology occupations, gender equity in the workforce, labour and immigration policy, and women's changing role in society.

These records provide valuable information on the way in which the Association of Lesbians, Gays and Bisexuals of Ottawa / Association des lesbiennes, des gais et des bisexuels de l’ Outaouais functioned from 1991 to 1995. The records consist mostly of board meetings’ minutes and correspondence. It also provides information on the issues that concerned the organization during this period. For example, it contains articles, clippings and reports on the Canadian Human Rights Act (Bill S-15) and the Court Challenge Program and Paedophiles (Bill 128).

This fonds contains mainly textual records relating to the Vancouver Women's Health Collective. It has one series and consists of workshop documents for issues such as menopause, breast cancer detection, premenstrual syndrome, vaginal and cervical health, and pap tests. It also contains 2 T-shirts; one New Democrat candidate and one for LEAF (Legal Education Action Fund).

The fonds contains records created or accumulated by Maxine Glover during her time as a student and employee in British Columbia. Material includes photographs, correspondence, reports, newspaper clippings, diaries, and yearbooks.

This fonds is composed mainly of textual records; the administrative records of Mothers Are Women and documents relating to policy issues such as child care, parental leave, and the recognition of women's unpaid labour in the home. MAW primarily lobbied for the Canadian government's recognition of homemakers' contribution to the national economy, and collected an abundance of research material related to these efforts. Additionally, this fonds contains documents relating to the group's publication of Homebase magazine, and other outreach activities, such as workshops and symposiums. There are two audio cassettes featuring interviews with Maureen Kellerman on radio programs, and a number of objects promoting MAW's various events and campaigns. While Mothers are Women did not exist until September 1984, the fonds includes articles, research material, and newspaper clippings from as far back as 1980.