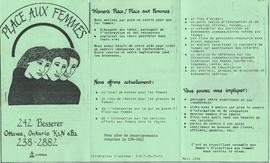 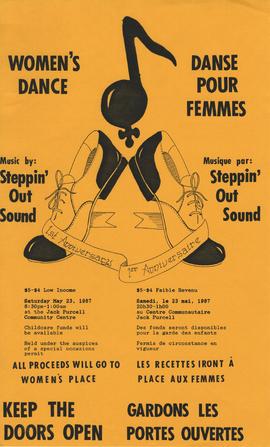 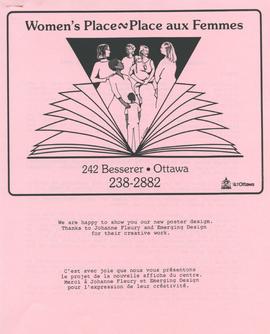 The idea for Women's Place/Place Aux Femmes originally grew out discussions held in January 1984 with Mayor of Ottawa, Marion Dewar. The community representatives and individuals who met with the Mayor felt there was a need for a centralized telephone information and referral service specifically for women.

A feasibility study on the need for such a service was commissioned in 1984 by an interim board named Women's Info. The study confirmed the need for one source to co-ordinate and provide information on the services available to women. Those surveyed also pointed to the problem of gaps in service and the need for outreach and advocacy, and so it was agreed that, although the service would begin with information and referral, it would grow into the areas of support, advocacy and direct services. In late 1984, while plans were being made for the new service, numerous concerns were raised about duplication of existing services, particularly with the Community Information Centre. To deal with these concerns, Women's Info decided to accelerate their growth plans and were given a grant of $10,000 to gather support and suggestions for the new proposal which included a wider range of services and a physical space for personal access and Centre activities.

Women's Info consulted the community extensively through mail-out questionnaires, pamphlets, and in-depth interviews, and discussions were also held with Community Information Centre representatives in an attempt to clarify respective roles and objectives. It was agreed that, besides providing information and referral, the new women's centre would also help identify and advocate for unmet needs and resources, and would work to heighten awareness of women's issues. The new proposal had extensive community support, and on October 16, Ottawa City Council approved funding. On June 12, 1986, Women's Place/Place aux Femmes officially opened at 242 Besserer Street.

From the beginning, Women's Place was concerned with reaching out to women who were isolated or disadvantaged because of age, ethnicity, poverty, disability or a combination of factors. Thus, their services, operating guidelines, and structure reflected the need to be inclusive and accessible. They did regular and extensive community outreach, established a francophone services collective and worked closely with other organizations to identify and work to solve problems caused by gaps in service. The Board was made up of both staff, volunteers and community members, and the organization was operated as a collective, with everyone sharing in the decision making process. Decision-making positions could not be held by men, although they could have limited access to services and information.

Like many women's organizations, Women's Place faced its share of financial problems, relying for funding on individual donations and government grants. In September 1986, only a few months after their official opening, their budget was reduced from $80,000 to $40,000, necessitating the cutting of 3 full time positions and many services. Another cut, in 1987, was met with a huge fundraising effort which included a reception for Bonnie Robichaud on Parliament Hill, film nights, a poetry reading, dances, a March for Peace and a music night. Since 1988, Women's Place/Place aux Femmes has relied mainly on grants from the provincial and local governments. In 1991, it moved from Besserer Street to Bruyère Street, where it rented the top half of a local community centre from the City of Ottawa.

The Ottawa Women's Place/Place aux Femmes d’Ottawa (WP/PF) and the Ottawa Women's Centre (OWC) records were donated to the University of Ottawa Archives and Special Collections (Canadian Women's Movement Archives) by the WP/PF in two separate donations in 1995. The OWC’s records had been stored at Women's Place since 1986, along with the records of other Ottawa women's groups. Prior to that, they were held by individual WP/PF group members.

These records are textual documents which cover the activities of the organization from its foundation in 1970 to 1991. They consist of administrative records, correspondence, planning documents for outreach and projects as well as rich information on other women’s groups during its period of operation. These records offer significant information about the grassroots feminist movement in Canada, particularly in Ottawa, in the 1980s. They also offer insight into the methods of organization, aims, activities and problems shared by many women's centres across the country.