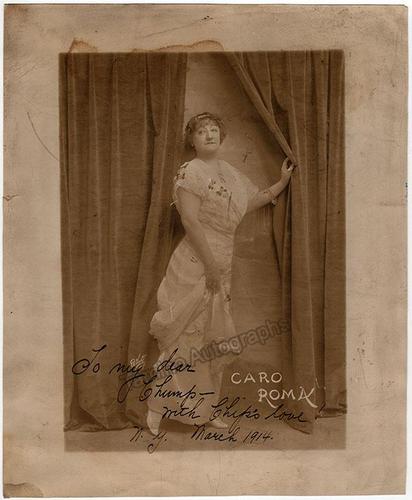 Caro Roma (1866-1937), shown left, was the stage name for Carrie Northey. One of the most popular composers of the 'Tin Pan Alley' era, nonetheless she used a genderless stage name. Born in California, she quickly became noticed as a talented stage performer, and her family sent her to Boston to study at the New England Conservatory of Music [1]. As a teen, she was employed in a French Opera company in Canada as their conductor, a true rarity. Performing across the world, she also developed skills in composing both music and poetry, often setting her own poems to song. Her most famous song was "Can't Yo' Heah Me Calling" [1], which, although it exaggerates an African-American accent in a manner seen as racist by today's standards, was found entertaining during the time.

I Come To Thee

Below left is a sacred work published by "Caro Roma", which is set to a text written by a man (George Graff Jr), which was a fairly popular convention (though Carrie Northey did set her own poems too). The song's piano part has been rendered as an audio file, to give an example of how it may have sounded if performed alongside a silent movie. Set in a major key, it is somewhat unusual in musical setting, concering the text has the speaker ask for God's forgiveness in their final moments.

Piano performance of "I Come to Thee"

I Come To Thee