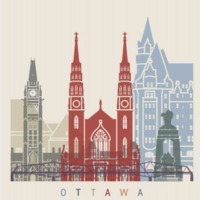 "International Seasonings: A Study of Immigration to Ottawa (2006-2016)" was created and launched by the 2019-2020 Digital Humanities Capstone class at the University of Ottawa. As a team, the seven students combined their diverse educational backgrounds and skills with the of Professor Jada Watson to develop this storymap on immigration in Ottawa from 2006 to 2016. Using Census data, the team mapped how immigration has shaped and influenced Ottawa through cultural institutions such as restaurants. Users are able to read more on the story of immigration in Ottawa and explore different cultural food establishments from all continents of the world.

The Data Mappers team hopes that you are as inspired by the history of Ottawa's cultural food establishments as they were!

Racial Profiling is Alive and Well at the University of Ottawa 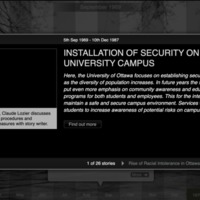 On June 13, 2019, a video of a black student being handcuffed at the University of Ottawa for skateboarding on campus surfaced on Twitter. Moments after, the video had garnered national attention on the news and quickly became one of the most prominent incidents of racial profiling on campus. When Jamal Boyce was stopped on campus, there was no demonstrable reason why campus security required his identification, or to know his purpose on campus. The altercation had even piqued the curiosity a PhD candidate named Christopher Kelly-Bisson, who witnessed the incident and reported that the security officers had ignored white student who was also skateboarding through campus. Many speculated that this was an instance of racial profiling – raising concerns amongst BIPOC students and families within and outside of the campus. After all, in the words of Kelly-Bisson, “[Racism] happens in [Ottawa or Canadian universities], it happens all the time.”

The year following this incident, racism on campus received increasingly more attention, coming to a head in the Fall 2020 semester, when University of Ottawa instructor Verushka Lieutenant-Duval used the n-word in class. Whether Professor Lieutenant-Duval is white or black, it is of critical importance that professors ensure that their classrooms are safe and respectful place for all students to learn and not have to endure racism or other forms of oppression. The act of Lieutenant-Duval using an explicit word in the classroom shows the level of amateurism of her profession that the school expects from their own academic and administrative staff to practice the policy of the prevention of harassment and discrimination.

This project reflects on the history of racial profiling at the University of Ottawa. With the rise of profiling on campus over the last few years and the continued prevalence of racism in society, it is important that we begin to understand why we are still dealing with these issues on Canadian campuses today.

"International Seasonings: A Study of Immigration to Ottawa (2006-2016)" was created and launched by the 2019-2020 Digital Humanities Capstone class...