Sébastien was responsible for mapping immigraton date. He was was provided immigration data in a .csv file for 2006 and 2016 Census per continent. The Data Team was responsible for extracting data for Sébastien. The immigraiton and geospatial data (by Census Tract) was extracted from CHASS Data Centre and the boundary data was downloaded from Statistics Canada.

One he had the data, Sébastien first evaluated the data files to look for inconsistencies, and to make sure that the totals added up properly. Then, he calculated some summations, changed some data types, and re-arranged the columns in a way that would be easier to integrate into ArcGIS. Making sure that the data is exactly what you want on ArcGIS is key here, because if you want to change some information later on, you would have to change it on the .csv and then re-upload It to ArcGIS online to make another map. Thus, to reduce the duplication of work, having a complete and finished .csv file is a must. 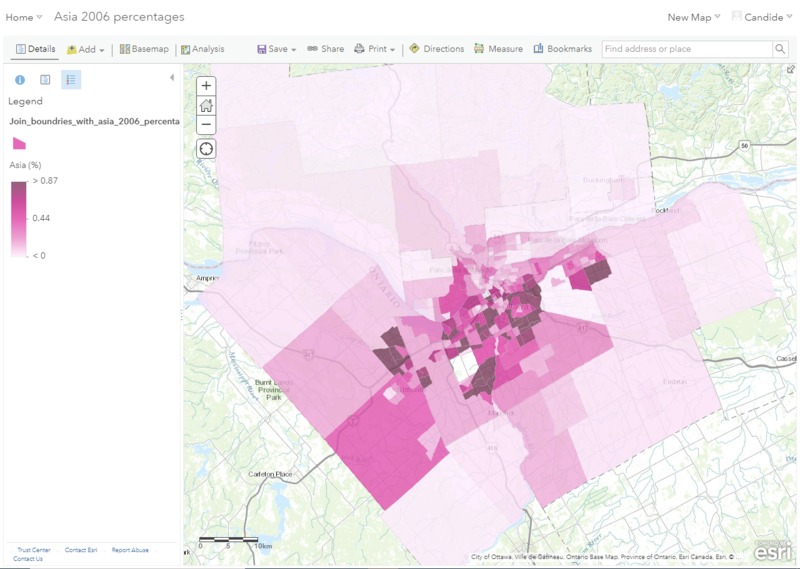 This map is a visual representation of Asian immigration population in Ottawa in 2006.

The mapping was done using ArcGIS online. The web app gave us all the necessary functionalities to join information together and map it on a geographic map. Sébastien had to go on Statistics Canada's website to gather the boundary files for each Census year (2006, 2016). He was then able to join the .csv with the boundaries file on the map, which allowed him to map the immigration total per continent and per Ottawa census tract (from the boundaries files). ArcGIS also provided enough stylization and collaboration options so that each member could add their piece to the final visualization.

All of the project maps can be access through ArcGIS Online: