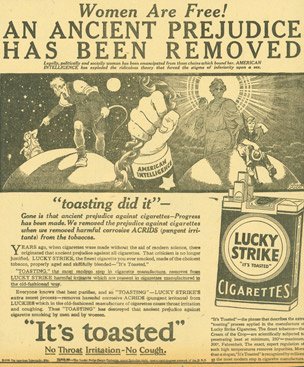 Originally, there were misconceptions that women do not smoke, particularly those that were considered nice or good girls. Indeed, while tobacco had been consumed in America in the late nineteenth century, it was not until 1929 that women were really expected or even allowed to partake in the consumption of tobacco products. Women were given the option to smoke in private, but even then it was still tabooed by American society due to its unfeminine nature: “Indeed smoking by women in North America and Europe had long been associated with loose morals and dubious sexual behaviour.”[1] The women that were smoking were perceived as whores or procuresses, or it was a symbol of prostitution and Victorian erotic photography. Only some rebellious women were willing to go against the social stigma in the early twentieth century. Regardless, the tobacco company did feature women in advertisements. These women were often young and attractive, and were featured for promotional purposes; however, their role was to lure the male rather than female consumer. Indeed, the lack of evidence suggests tobacco companies did not target women for any purpose other than male enjoyment, nor did the advertisements attempt to challenge the dominant social stigma attached to female smoking.[2] Nonetheless, fifty years after cigarettes came into circulation, female smoking began to become acceptable and even socially desirable: “This was due not only to the dramatic changes in the social and economic status of women over this period but also to the way in which the tobacco industry capitalised on the changing social attitudes towards women by promoting smoking as a symbol of emancipation, a “torch of freedom.””[3] Edward Bernays, the Father of Modern Public Relations, created the “Torches of Freedom” campaign in 1928, which increased the female market an in turn enhance the American Tobacco Company’s profit.

Bernays believed: “The conscious and intelligent manipulation of the organized habits and opinions of the masses is an important element in democratic society.”[4] As a result, Bernays stated that he could encourage women to smoke by linking cigarettes to notions of freedom and rebellion. In 1989, Bernays sought to end the stigma around women smoking in public by creating the campaign “Torches of Freedom.” Interestingly, selling cigarettes was a passion rather than occupation for Hill, and Lucky Strike was his particular favourite, as he was able to elevate it to be America’s best-selling tobacco brand. Hill realized that if he could get women to smoke outdoors, the company could double their female market. Bernays consulted Dr. A. A. Brill, a psychoanalyst, who explained that it was natural for women to want to smoke, and that the push for emancipation has suppressed the feminine desires. Since tobacco products were equated with men, women began to see cigarettes as torches of freedom.[5] In 1929, Bernays encouraged women to march down Fifth Avenue during the Easter parade in New York City, and protest against gender inequality. Bernays telegrammed thirty debutantes from a friend at Vogue to participate in the demonstration, encouraging them to combat the prejudice against women smokers. There were hopes that prominent figures from the Women’s Movement and Churches would join to show unity in the acceptance of female smokers.[6] It gained a vast amount of coverage and allowed women to feel confident about smoking in public despite potential ridicule. Marches also took place in Boston, Detroit, and San Francisco, and newspapers across the country published stories on it. Bernays central idea was to manipulate the opinion and values of the consumer, and to break down the appeal of cigarettes through networking and media. The success of expanding the market to include women related to the association of cigarettes with broader social change. Smoking was a torch of liberty and freedom, in that it was promoted as a substitute for the ballot.[7] The advertisement above demonstrates the message Bernays sought to send.

Phyllis Marie Jensen explains “…women saw cigarettes as symbols of freedom, a sign that they were their own person, that they had gone beyond society’s narrow roles for them. Thus, liberation and freedom became central themes in advertising directed at women.”[9] By the 1930s, the tobacco industry became more sophisticated and used a diverse range of messages to promote products to the female market.[10] Freedom became equated to female intrusions into male public space. Indeed, woman used smoking to challenge gender norms regarding tobacco consumption. Furthermore, Cheryl Krasnick Warsh holds: “Cigarettes, Edward Bernays’s “torches of freedom,” were ideal symbols of that democracy because they were inexpensive and instantly recognizable as emblems of maturity, rebellion, and liberty.”[11] However, it is questionable regarding whether or not smoking would have become as popular as it had among women if the tobacco companies did not seize the opportunity in the 1920s-1930s to exploit the ideas of liberation, power, and other important values to recruit women to the nicotine market.[12] Bernays in his Biography of an Idea ultimately holds: “Age-old customs, I learned, could be broken down by a dramatic appeal, disseminated by the network of media. Of course the taboo was not destroyed completely. But a beginning had been made, one I regret today.”[13] Although Bernays later realized the damage of tobacco products on the health and well being of the consumers, the campaign demonstrated two things: that the stigmatization of female smokers was disintegrating, and that the American Tobacco Company would be able to continue targeting women.