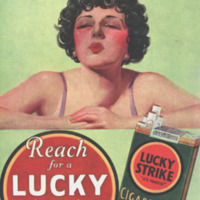 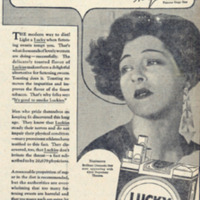 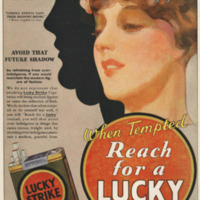 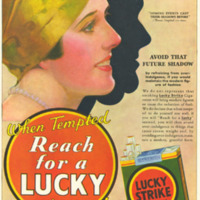 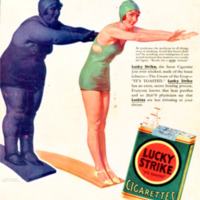 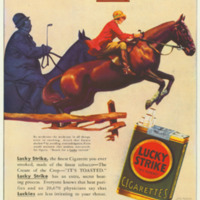 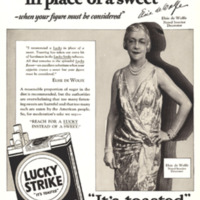 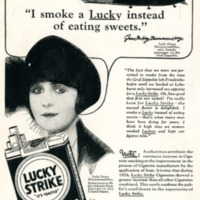 In 1928, George Washington Hill, President of the American Tobacco Company, believed that in order to persuade women to consume tobacco products, advertisements had to focus on women’s waistline and dieting more generally. As slimness had become a staple of American society, along with bobbed hair and short skirts, Hill saw it as an opportunity to sell tobacco to women as a fat free way to satisfy hunger. To achieve this, he hired Edward Bernays to head the project. Bernays insinuated a comprehensive campaign was necessary to ensure the thin body was perceived as socially desirable, especially to upper and middle-class women. Dieting manuals were placed inside Lucky Strike packages to encourage smoking as a form of weight control.[1] Women often used smoking as a form of weight control, and it was common for young women to believe that smoking was correlated with thinness. Further, women were more likely to endorse the strategy than men, and report using cigarettes as a weight loss method.[2]

The Lucky Strike campaign “Reach for a Lucky instead of a sweet” was one of the first advertisement campaigns that targeted women. The message was effective and far reaching, which resulted in increasing Lucky Strike’s market share by over 200%, and it became the best-selling brand until the 1950s.[3]The underlying message of the “Reach for a Lucky” campaign was to encourage women to maintain a girlish figure by smoking instead of eating candy. Indeed, candy makers may have objected to the campaign infringed on their product. However, it was eventually refocused to encourage women to refrain from overindulgence. The advertisements often depicted women in a stylish manner, which incorporated the tagline “It’s toasted,” based on the way in which the cigarettes were processed.[4] Generally, the advertisements that focused on weight control by means of smoking often neglected to consider healthier options and often opted for the cigarette as a means of maintaining a ‘modern figure.’

Lucky Strike advertisements that targeted women often used phrases specifically to appeal to thinness, which was often equated with health. In the first advertisement, the woman is blowing a kiss to the audience, and the caption reads “To keep a slender figure no one can deny,” likewise the one beside it states “I know an easy way to keep from getting fat.” Advertisers, especially Bernays, knew that women were driven by emotions, so by targeting weight and using words like slender or fat, the women would be more inclined to consume tobacco if she thought it would help control her weight. The advertisements promote the consumption of tobacco as a form of weight control as the ‘modern diet’ which it claims thousands of women are doing. Luckies were made to have a toasted flavour to make them more appealing and can be used as an alternative to sweets. It also reveals that men knew this tactic, which is part of the modern lifestyle. The advertisements were promoting an ideal image or body, and it glorified youth and slimness. It was often believed that it would control weight because smoking was an appetite suppressor, but it was also a dangerous and less healthful tactic to use.[5] Women were seen as self-respecting if she improves her visual appearance, since physical identity was critical to the woman’s success or failure in life more broadly.[6]

Since it was deemed inappropriate to advertise tobacco consumption as a form of weight loss, Lucky Strike started telling women to avoid temptation to overindulge or the “Future Shadow.” The advertisements were aimed at demonstrating what would happen if women continued to overeat or indulge in sweets, thus implying the consumption of tobacco would prevent it. The advertisements shifted the wording to state that Lucky Strike cigarettes would not bring a modern figure or reduce fat, but when tempted one should opt for the cigarette to avoid overindulgence often resulting in excess fat. Despite some diversity in terms of age, most advertisements used a youthful, beautiful, feminine, Caucasian woman that was well-dressed and often held middle or upper class status, which was reflective of the intended audience. The anti-sweet campaign was revolutionary as it created consumers rather than simply luring women to favour a certain brand.[7] It also demonstrated the shift in marketing that moved away from need-based and towards want-based advertising, which generated a greater response from women.

The consequences of the advertisements that Bernays and Hill used to target women were not just bad due to the consumption of the tobacco for weight control purposes, but the consumption of the imagery as well. Indeed, in a culture where sexual objectification of the female body occurs, women are at an increased risk for a variety of negative experiences, such as being treated as an object, or it can lead to lower self-esteem and body image issues: “Objectification theory states that, as a consequence of viewing the self as an outside observer, women are at an increased risk of the development of depression, eating disorders and sexual dysfunction.”[8] The advertisements that were connected to the sexual objectification were also affiliated with weight loss. While the 1929 campaigns were successful, especially among women, the Federal Trade Commission in the 1930s ruled that American Tobacco’s Lucky Strike brand has to take a three-fold action: “Cease running testimonials by endorsers who had not actually used the product, indicated when testimonials had been paid for, and stop claiming that smoking cigarettes could control people’s weight.”[9] The company had to make some changes, but ultimately Hill was still able to succeed in the tobacco wars, and Lucky Strike overtook Camel, becoming the market leader for several decades following.

[4] Maja Bajac-Carter and Norma Jones, “Reach for a Lucky Instead of a Sweet: An Exploration of Early Cigarette Advertising,” in We Are What We Sell: How Advertising Shapes American Life…And Always Has Volume 1, e. Danielle Sarver Coombs and Bob Batchelor (Santa Barbara, California: Prager, ABC-CLIO, LLC, 2014), 128.